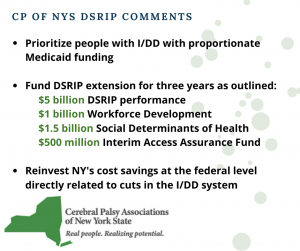 The Cerebral Palsy Associations of New York State recently submitted comments to the state Department of Health in support of a proposal to extend New York’s Medicaid Delivery System Reform Incentive Payment (DSRIP) waiver years and seek an additional $8 billion in federal funding for continued support of health care transformation in the state.

In addition to supporting the waiver, CP recommends changes to the DSRIP process that would consider the concerns of I/DD providers.

“People with developmental and other significant disabilities and the agencies that support them were not prioritized in the first round of DSRIP,” wrote CP of NYS. “Various PPS initiatives included system supports and services for people with intellectual and developmental disabilities, but the amount of Medicaid funding for this high-need, high cost population has not been proportionately reflected in DSRIP activities across the state. Incentives, preferably requirements, must be strong enough to ensure value driven entities (VDE) include I/DD providers.”

CP’s comments also outline that much of the savings New York claims at the federal level is directly related to cuts the state has made to the I/DD system of providers. This has reduced the Medicaid dollars New York State has had to spend on I/DD services and has saved the federal government an estimated $4 billion over the past 10 years.

CP believes that DSRIP must address the inequities confronting the high needs group of people with disabilities.

“If we are to move to a more integrated, community of supports for people with disabilities, the regulatory and financial infrastructure needs to support and align with those goals.”